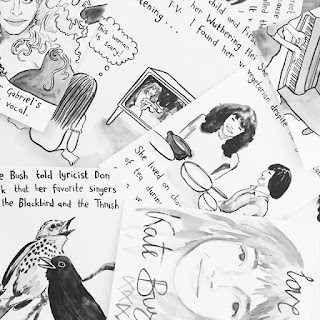 I am currently showing some Kate Bush paintings at A Side B Side gallery for the "London, New York, Paris, Munich" exhibition curated by Astrid Horkheimer and Harry Pye

Its a great pop music themed show and well worth visit but be quick as it closes on the 14th Sept! 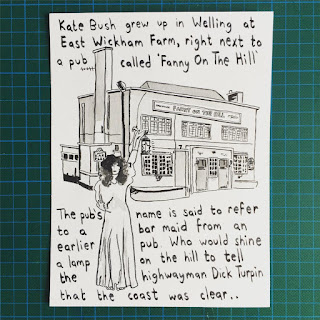 I chose Kate Bush as my subject for the show as she grew up in the area I currently live in South East London. The paintings I made for the show will eventually be made into a zine and feature interesting stories about Kate Bush (I'll post more info about the zine when its printed).


"London, New York, Paris, Munich" is an exhibition celebrating the wonderful world of Pop music.
The show opens on Thursday the 10th of September at A-side B-side Gallery and is curated by Astrid Horkheimer and Harry Pye.

Astrid says: "The aim of L.N.Y.P.M is to have a blast. Highlights of the show include Liam Scully's Beyonce tribute, Barry Thompson's drawings of Kurt Cobain, Paul Hamilton's response to The Beatles White album, a painting of Yoko Ono by Rowland Smith, a Kate Bush fanzine put together by Sarah Doyle, a gigantic Florence and The Machine painting by Julie Bennett, Sandra Turnbull's mixed media tribute to Ian Dury & The Blockheads, Dominic From Luton's work inspired by Paul Young, Pop Star obituary paintings by Hugh Mendes, and a Michael Jackson painting by Geraldine Swayne."

Harry says: "I'm really looking forward to this show. I've been collaborating with Gordon Beswick and Mikey Georgeson on several new paintings of David Bowie, which will be hung together in our "David Bowie Corner".  Gordon and I have also made a new painting of Brian Jones that was inspired by a song on Micko Westmoreland's new L.P "Your's ETC Abc" We're delighted that the p.v. of this show is also the launch party for Micko's excellent album. Hope you can make it on Thursday the 10th as I'm sure a splendid time will be had by all."
Posted by Sarah Doyle at 11.9.15