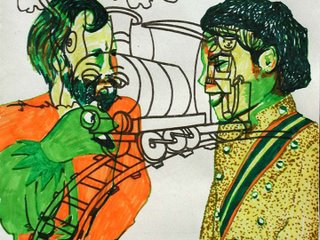 The Monstrous Tales show at APT Gallery opens in August

‘Monstrous Tales’ brings together an exciting mix of artists who employ humour, absurdity and spectacle to investigate and portray the monstrous, the bizarre, and the shocking. Through the use of satirical humour Monstrous Tales will question, reveal and expose the monsters that we have become accustomed to within the media, film, and the everyday, allowing the viewer to confront the unfamiliar within the familiar. These monsters are not only the hairy, drooling, sharp teethed creatures that live under children’s beds, they are stars of reality TV, plastic surgery freaks, countries who rage war, stories in children’s books, or celebrities whose life’s are lived out through trashy magazines. On the evening of the private view Nick Hornby will be performing a sound piece that involves brining a car in to the gallery space, Oreet Ashery and Stephen Wilson will perform ‘Three Sons’.