A platform for performance artists, musicians, sound artists, video and filmmakers, followed by an after Party.

Artist Oriana Fox will be composing an reinactment of Yves Klein's performance painting where he used "living paintbrushes". He covered nude women models with his signature blue paint (International Klein Blue, IKB) and then in a piece of performance art in front of an audience "painted" with them on large sheets of paper by directing them verbally. Instead of using naked women Fox will be using male performers.

DJ's will groove with you late into the night...

Kiss Of A Lifetime 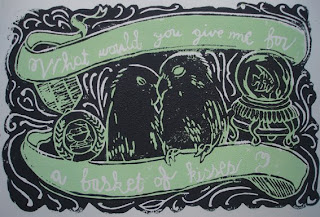 My piece in the Kiss Of A Lifetime show is based on the William March book and 1956 film “The Bad Seed”. The focus of the film is Rhoda a murdering sociopath child. She uses the phrase ‘what would you give me for a basket of kisses?’ to ingratiate herself and get what she wants from adults. Her syrupy facade hiding the fact she is a murderer and "a cold, self-sufficient child who plays by her own rules".

Show info:
The Kiss of a Lifetime is a limited edition print show featuring the work of both internationally renowned artists and emerging talent from the UK and abroad.

This show aspires to give an overview to what the ‘Kiss’ signifies within our contemporary culture in the broadest sense, from the romantic to the lifesaving, from the prosaic to the violent.

The show is presented salon style, with the artists proofs pinned to the wall – like that of a love forlorn bedroom covered in posters of idolisation.

See the BBC news report about the show

This show is dedicated to Tony Hart rip.

MEDIA SUPPORT BY: FLUX MAGAZINE
Posted by Sarah Doyle at 11.2.09