The Blocksmith at Chutney 2 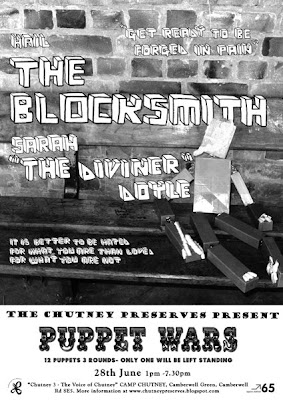 The Guy Hilton Gallery Presents
POLICE AND VIOLENCE at the SASSOON GALLERY in Peckham, Blenhiem Grove

Following his reenactments of the death of Jean Charles De Mendez, and most recently Ian Tomlinson, Mark McGowen continues this theme by curating a one day event a based on real live events about pigs
kicking people’s heads in. Featuring art, live performances, bands & more from some of the most interesting contemporary artists based in and around London. You are invited to participate in what promises to be an anarchic, interactive and informative event.