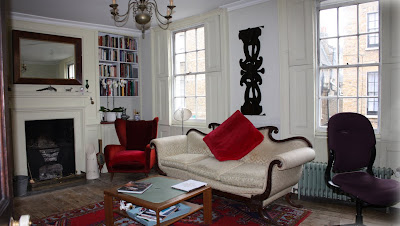 Closing event, 18th July, 2pm-6pm
Gina Birch & Hayley Newman of the Gluts will be presenting a Gluts(y) Performance at
about 2.30pm.

Sealed bids will be opened at 4pm.


Sold Out brings together a group of internationally renowned and emerging artists to raise funds for Elastic Residence and The Palestinian Children’s Relief Fund. Opening night performances include Martin Creed and His Band, whose music has been described as willful, wild and pushing the extremes of noise and silence. Among the internationally renowned artists showing, Beat Streuli provides an image from his Brussels series, characteristic of his street portraiture that captures the extraordinariness of the everyday, urban experience. From the well-known UK contributors, Daisy Delaney donates work that specifically responds to Sold Out, and subverts familiar images to deliver unexpected messages. The event closes with a performance by Gina Birch & Hayley Newman of the Gluts, concerned with the effects of over-consumption, capitalism and climate change.

Work will be for sale by auction on the basis of sealed bids that can be placed at any point during the exhibition until the closing event on July 18th. On this last day, all bids will be opened and the ‘winners’ informed.

Monies raised will go towards the ongoing development of the Elastic Residence programme, an artist run space aimed at giving artists direct access to exhibition opportunities. 20% of funds raised will be donated to
The Palestinian Children’s Relief Fund, a non-political, non-profit organization working to address the medical and humanitarian needs of Palestinian children.

AN Magazine's review of the show 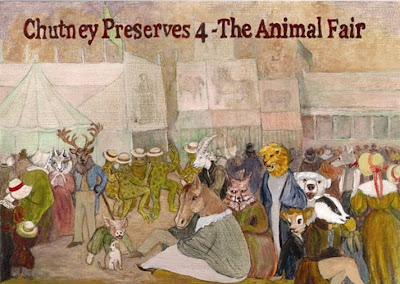 
I will be bringing Monarch Butterfly Programming to Camberwell Green for this years fantastic Chutney Preserves. Be there and have your mind melded to join the ranks of the other fabulous Monarch Slaves such as Beyonce, Rhianna and Lady Gaga.

From 1279 until 1855 a fayre was held on Camberwell Green, one of the many attractions was a menagerie of wild animals captured from distant lands. In homage to the beasts of the ancient Camberwell Fayre, artists will create a fair and foul enclosure of luxurious and curious beasts, transforming the Green into a safari park for human animals and their keepers, with beastly goings on, sideshows and a program of performance in ‘the big top’

Timetable of Performance in and around the 'Big Top'
(note running order may change)
1.30 - 4.30pm
Vanessa Mitter with James Gardiner - Repetition through voice in word and noise - an animal noise de-constructing communication
Frog Morris - Reading poems he has written about animals
Mikey Georgeson - Mr solo will be manifesting his primordial marmalade whilst counting down to indivisible unity and wonder via pink ukuleles and dislocated antics.
Jessica Marlowe - Animal choir
Charlie Fox and the Urban Bear Research Centre
Marc Vaulbert de Chantilly will arrive on an epic journey from Marble Arch with his gallows and hang fugitive, criminal animals

5.00pm - 7.00pm
Pepomo with 'Animusical' the Pepomo group will dress in home-made animal costumes, sing songs, and dance, with live backing music, including adding a new 'exotic' character - especially for Chutney Preserves
6.00pm - assemble outside Captain Magnos Camper Van on the Green
the intrepid explorer Capt. Magno will present to the general public the last surviving specimen of a nearly mythical beast, recently brought back from his most recent Amazonian expedition. This mysterious animal that has no ears or eyes has yet remained in a state of comatose slumber. It is rumoured that it's only known defence mechanism on being awoken is an extreme form of spontaneous combustion.

On-going artists performance/ interventions in and around the Marquee and Green in cages, pens and on safari:
Rebecca Feiner and Helene Corr with Worm Charming Olympics, Lord Darwin and appreciation of creatures small
Daniel Lehan - champion snail racing arena
Paul Sakoilsky and Reg, King of dogs
Joanna McCormick and Dido Hallett - Chimeric animal drawings made to order
Miyuki Kasahara - The fox witch fox will appear with her tube. The tube fox will answer visitor's questions by vomiting coloured stones.
Devyani Parmar - Piggy Bank
Marq Kearey - missing pets - hand made lost dog notices that appear on street corner walls and tacked onto poor unsuspecting council planted saplings on common grounds and parks
Julian Wakeling - displays of shadow, animal puppetry
Libby Shearon - Post spill animals at the watering hole bar
Sinead Wheeler - "Circe's speed dating" - the witch / goddess Circe lures travellers to her table with Twiglets, Campari and Pepperami treats, and offers readings from the ancient cards ('Zoo Snap', 'Farmyard Donkey' etc) to determine their animal - Highland Cattle, seal, guinea fowl, goat.. If suitors spurn Circe's love, they are condemned to wear the mark of their beast eg. pigs' ears / snout, bull horns, cock's tail.
Ricarda Vidal and the Animals of Boss Farm - what does a Greek frog say? -Animal language translation project.
Daisy Delaney - Drive by safari
Ben Woodeson - Gold Fish Soup. Ben serves cold gold fish soup in honor of Marco Evaristti's gold fish in a blender. The soup will be distributed free of charge!
Rachael House - the Pet-Tastic museum and attractions. Rachael will be introducing the Cynocephalus Nation, and asking ‘Do dog headed people walk among us?’
Charlie Fox and the Urban Bear Research Centre - Turning the tide of ethology, bear and comrades will be sharing the rules and manners of contemporary bear etiquette. Humans will be invited to enter Urban Bear’s special acclimatized tent to share tips on the latest fashion, movements and manners from ursatopia. Debretts meets Selfridges, Urban Bear spares no man or woman in search for answers to animal/human behaviours, in a make-it-up research programme
Frog Morris - reading his animal poems to passers by
Sarah Doyle - Butterlies - The Monarch Butterfly and Illuminati
Linda Barck - Nesting on the green for one day only. The Fantastical, Fanatical, Featherosity Altar. For all the beaked and feathered creatures, that lives in myth, religion and all those magical and in between spaces, we will pray, offer, worship and confess to you on this one fabulous day. May the egg be brought safe to the other shore and the birdman live eternally.
Magnus Irvin - Travels with Captain Magno. Part 1
Raul Pina Perez -the painter and the philosopher'': PORKY PAYS
Lady Lucy and Drawing Exchange - Make drawings around Camberwell Green taking 'Animal Farm' as a departure point. No drawing experience necessary - all welcome
COTH - Cult of the Harvester (Sarah Sparkes and Simon Neville) with 'JISM- Conscientious Carnivores Contemplate Happy Meats'
Marc Vaulbert De Chantilly - In the Middle Ages animals were tried in local courts for crimes ranging from theft and vandalism, to homicide and sexual perversion. Marseilles Lion, Eton rat, and Dodd the Dog. All must hang
Jo David - Invocation of the Pegasus. Through a series of interventions, an attempt will be made to resurrect, or recreate, the lost ancient symbolic creature.
Geraldine Swayne - Shepherdess of the human herd
Calum F Kerr - Dr Gerald Van Elk presents: Are You Wild Enough? Dr Gerald Van Elk is Camberwell’s leading Ethologist. He is conducting a study on the wild behaviour of animals, human and non-human alike on the Green. He will present a short lecture and interview throughout the day the animal menagerie asking questions pertaining to his research and performing tests relating to Aggression; Communication; Group Behaviour; Instinct; Learning and Reproduction. Please note: Dr Van Elk is NOT a member of the APBC (Association of Pet Behavioural Councillors).
Jacqueline Utley - brings small enclosures to the green; where tales from past fairs merge with the fictional creating parallel miniature worlds which visitors can help build.
Simon Ould, Liam Scully, Vanessa Scully
A Goat

Trade Gallery is part of the new One Thoresby Street building

Sarah Doyle’s lively series of drawings are created on the pages of a colouring book – of which the printed, bubbly outlines of monkeys, houses, gardens, jolly looking people and so forth are still visible. Printed images like these are approximations of reality, and at early age form the foundations of our ability to read, recognise and participate with images, icons and symbols.

Doyle’s felt tip pen drawings respond to the call of the book, to colour in, but the response uses a completely different set of imagery, that of iconic pop stars. In spite of what we know about the subject matter - Michael Jackson, Prince, Madonna - Doyle’s multifarious representations manage to carve out a space that avoids a kind of pop art nausea caused by an over-familiarity with the subject, and the interpretation of the subject in art.

In short her deployment of two sets of imagery, the book’s, and the pop stars’ complicates our reading of the work and creating a deeply peculiar and idiosyncratic set of drawings.

Trade will present a selection of artworks from Doyle’s series of 100 Michael Jacksons, 100 Madonnas, 100 Princes, in the main gallery space. 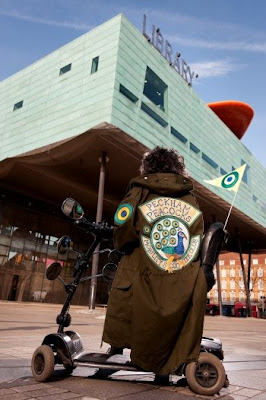 I will be at Rachael House's Peckham Peacocks event in the guise of a mod mechanic. I'll be customizing mobility scooters and various other vehicles on the day, so if you would like your scooter or other wheeled vehicle to be embellished in a mod scooter style do come along and become a member of the Peckham Peacocks Mobility Scooter Club. There will also be performances by The Red Wheelies mobility scooter formation team as well as mod makeovers and lots more.

We are pleased to tell you about the new project by Rachael House, Peckham Peacocks, a mobility scooter meet in Peckham Square.

Please contact Rachael House at rachaelhouse@btinternet.com for more information or images.
Posted by Sarah Doyle at 7.6.10