‘Even though life isn’t black and white
it often looks better that way.’
Barry Gifford


Behind every starry silver screen performance there is a real person who has been sucked into the machinery, restyled and re-presented in a recreated environment as the hero or villain of our dreams. Since the early 20th century Hollywood has transformed these mere mortals into gods, stripping them of their skeleton-laden identities and grinding them out as perfect, plastic covered, star shaped deities. This machine of dreams is of course a charade, and the cinema is a place where nothing is as it seems, a place where the real is always mingled with the imagined.
The Dream Machine is a group show of eleven artists who inspired by the recent renaissance of black and white at the cinema, mine the archives to juxtapose early film magic, glamorous imagery, PR driven myths and dreamlike stage sets with the downbeat behind-the-scenes construction and all-too-frequent real life tragedy that is the reality of Hollywood’s dream machine.


Kirsty Buchanan shows a series of cinema inspired etchings.
Sarah Cleaver shows a series of photographs inspired by black and white cinema.
Sarah Doyle’s animation reactivates the onscreen moment where John Gilbert first sets eyes on Greta Garbo and captivated by her beauty instantly falls in love with her.
Paul Kindersley’s performance We Make Cinema, will be inspired by the stars of silent cinema.
Cathy Lomax examines the publicity and propaganda that turns mere flesh and blood into ethereal, shimmering meta-humans.
Alex Michon’s paintings draw on the sadness, melancholy and fear that she associates with her experience of watching early cinema on TV as a child.
Common Objects and Travis Riley’s work is inspired by the concise poetry of inter-titles
Alli Sharma bypasses the angry young men of the 1950s to spotlight the ‘kitchen sink’ women in her series of paintings.
Corinna Spencer - presents a new series of paintings - Hollywoodland that feature early Hollywood stars Olive Thomas and Virginia Rappe both of whom met tragic ends.
Charlotte Squire’s sculptures take their inspiration from film lighting.
Mimei Thompson – Inspired by the dark mise en scene of Charles Laughton’s Night of the Hunter, Thompson’s printed paintings capture the high contrast and constructed atmosphere of this timeless masterpiece.
Posted by Sarah Doyle at 14.10.13 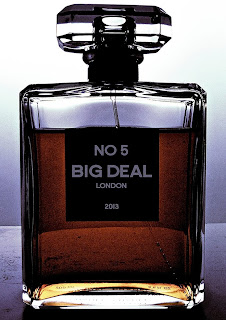 I will be showing my piece "I've Looked At Clouds That Way" at Big Deal No5.
Its an exciting show in a giant car park in W1 with lots of great artists, do come along if your free →

BIG DEAL No5
In association with Geoffrey Leong