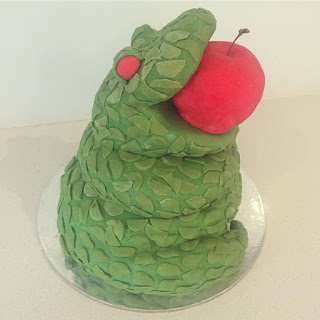 Did you know that I also bake?
I was commisoned to make a cake for John Milton's 408th Birthday party at Milton's Cottage on the 9th December 2016.
Here is my serpent cake with red chocolate innards, I defy anyone to resist his tempting pink sponge cake apple!
The party for Milton was a great success and was also a celebration of the launch of The Comus Circle 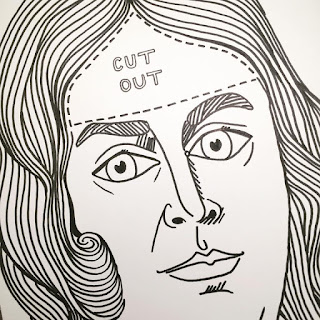 I recently made some worksheets for the Halloween workshop at Milton's Cottage. If you would like to make your own John Milton dreaming of the demons from his most famous book Paradise Lost the PDF will be available to download on my webpage very soon 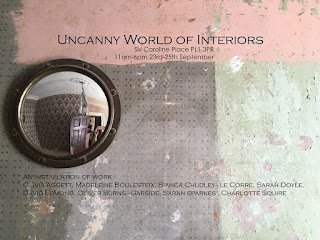 I am part of the Uncanny World Of Interiors show at 6 Caroline Place, part of Plymouth Art Weekender

The temporary domestic space at Caroline Place showcases the work of 6 designers and artists working with everyday materials, transforming the mundane into objects of desire. The unheimlich of Freud’s analysis wherein things pertaining to homeliness and domesticity are somewhat wrong footed by one thing or another, subjective to be sure, make us question what exactly ‘home’ is. A place? A feeling? A tribe we belong to? This is a subject that has substantial contemporary currency as migration and dislocation move cultures from places of conflict or through economic displacement. Small items may be carried from one place to another, they are left to be found later and integrated into the scheme of things.A group installation of painting, drawing, sculptural objects mirrors and chandeliers


The Angry Pixie, Silky, The Saucepan Man, Dame Washalot and Moonface on the Faraway Tree I made for Animating Lordship Lane at Mrs Robinson with Fantasy High Street
Lordship Lane is where the author Enid Blyton was born in 1897. Her tales about The Magic Faraway Tree were some of my favourite books when growing up. It was so much fun to make my own take on the characters from these stories.
All of the windows in the tree have drawings of the interiors of Enid Blyton's home where she wrote her children's stories 🌳

There are art workshops and performances for the Family Fun Weekend on Sat 3rd - Sun 4th Sept.
I will be running a Paper Automata workshop for children at Mrs Robinson, 128 - 130 Lordship Lane from 2 - 5pm on Sunday


My Faraway Tree made for Animating Lordship Lane at Mrs Robinsons shop. Enid Blyton was born on this very street many moons ago
A video posted by Sarah Doyle (@sarah_doyle) on Aug 30, 2016 at 5:11am PDT

I am showing new work in an outdoor exhibition at Milton's Cottage - the only surviving residence of the poet and parliamentarian, John Milton, and the place where he completed Paradise Lost.

The garden has been planted with flowers, trees and herbs that are referenced in his poetry and artists have been asked to create small-scale, site specific artworks that respond to his writings about gardens (including the Garden of Eden) as well as the garden itself. 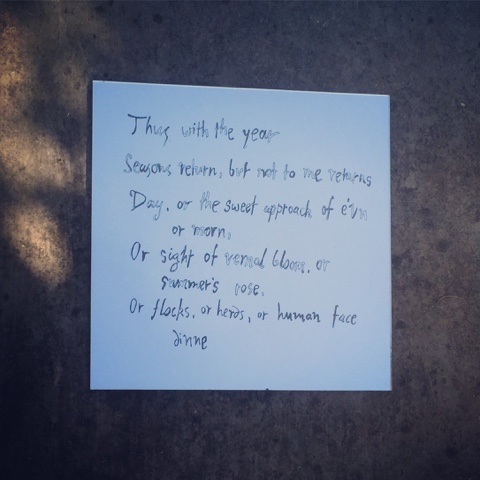 I am showing mirrors in the flowerbeds of the gardens which are etched with Milton's handwriting. Each mirror has a different quote of Milton's about flowers. 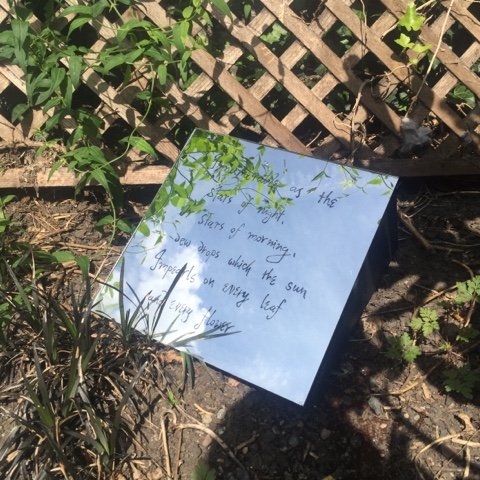 Following in Father's Footsteps from Sarah Doyle on Vimeo.

This film was created as part of Camberwell Arts Festival 2016 “Metamorphosis” project and features a song by the Music Hall star Vesta Tilley. She was one of the foremost musichall acts of her day and started her male impersonation act at the age of only 5 years old. Vesta Tilley personifies metamorphosis, an enduring icon, her influence can still be felt today.

For more information visit → camberwellarts.org.uk
Posted by Sarah Doyle at 13.6.16 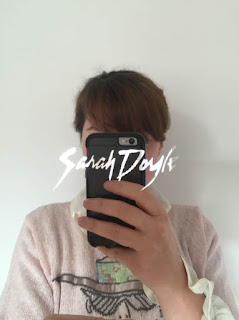 The Names features a number of small works; each one is about the name / signature of the artist who made it. From Duchamp’s subversive R.Mutt to Josh Smith’s shameless painted autographs, artists have cavorted with the significance of the signature. As a rule, in the early 20th century, the signature was a vital addition to the front of an artwork, embedding the artist’s identity into the work with showy authentication. In contemporary art, however, the signature is generally discretely placed on the back of an artwork and a prominent signature has become the signifier of very bad, amateur taste.
Denying the name on the front of the work is an art world game. The value of an artwork depends upon its maker – so excluding the name means only those in the know, know for sure the veracity of the work.
In contemporary culture ‘bad taste’ can quite legitimately be resurrected and become a sign of the most adventurous tastemakers. Thus, there are now artists who knowingly embrace the potential of the signature by signing their work prominently and defiantly on the front.
The Names first appeared at Sluice Art Fair in October 2015. It will be reimagined at Transition Gallery in January 2016 with 18 additional artists.
Posted by Sarah Doyle at 12.1.16