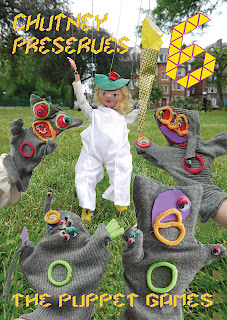 My puppets, which will be challenging you to a danceoff on the green


Invoking the spirit of the ancient Camberwell Fair and its
promise of “Rare doings in Camberwell”, The Chutney Preserves invite you to come and play with us at The Puppet Games.Who cares that Camberwell Green was overlooked as a site for beach volley ball or equestrian dressage  – because Camberwell has the Puppet Games!!

Marionettes compete in rhythmic gymnastics, the obstacle race and a final surprise showdown to be judged by esteemed Chutney judges (susceptible to bribes and blackmail)
Side-shows feature puppets of all persuasions.Unsporting interactions will be offered.Musical interludes. Unwrong Quizz with prizes for all. Make your own puppet contender at a free workshop!All under canvas, leafy boughs and the azure sky.You may bring your own water and steroids and picnic on the Green.

Sarah Doyle
I am making a South London green dancing parrot puppet. Feral parrots have been recorded in London since 1855. There are however rumours that the parrots of South London are descended from birds Jimi Hendrix released in the 60s. The parrot will be challenging all comers to a dance off competition on Camberwell Green.
I am also making a puppet that will be asking passers by to spin their heads in a dutty wine dance off.

Frog Morris and Mark Dean Quinn
Prepare to put your creative agility to the test. The UnWrong Quiz is the quiz with no right or wrong answers. We celebrates the people who can't remember who holds the world record for the 100 meters, but might think of something useful to do with a ball of plasticine, twelve meters of garden hose and David Hasselhoff's chest hair. For this the special Olympic edition of the the UnWrong Quiz , the audience will be challenged to write stories, make up jokes, draw pictures and invent rules for some new sports we could actually stand a chance of winning at.

My puppet will be called 'Nadia' and she is a Rokurokubi* yōkai (supernatural figure/monster).
Starting like a normal human being, she will reveal her true nature during the games.
She resembles the legendary Romanian gymnastic queen, Nadia Comaneci who was the first gymnast to score a perfect 10.0 in the Olympics 1976.
*Rokurokubi are one of the most common yōkai found in Japanese folklore.
They look like normal human beings by day, but at night they gain the ability to stretch their necks to great lengths. On this occasion, Nadia's neck stretches when she gets excited which will surely happen often during the Puppet Games!

Nick Baxter and I will be making a paralympic gold champion wheelchair puppet out of old bicycle wheels, newspaper, parcel tape, string and gold leaf. The puppet will be quite large, about waist height and the wheels are from an old bmx bike. We will take part in the obstacle course if possible but otherwise will just be nipping about the place doing wheelies and bumping into people. We also plan to dance to some of Jude Cowan's tunes....


Calum F. Kerr
First there wuz Babee-Franke now there is 'Granpaw Frank E.', over hunert and fifty years old he was to compete in the rodeo dressage at the first modern olympics in 1896. Unfortunately he thought it was in Athens, Georgia not Athens, Greece so he missed it entirely. While his errent grandson Frank E. became singer for Lonesome Cowboys from Hell Granpaw has been training up and is ready to return for the Games. He can still lasso and barrel-roll with the best of em. Frank E. will be there to encourage his granpaw, and to protect the public.


Phillip Raymond Goodman
'you saunter up to Camberwell green, a spring in your step, you see in the distance "oh wow a giant chess board, I've always wanted to try on of those" but as you get closer you see something is amiss, no kings, no queens, no bishops, rooks, horsies, or pawns "what's going on here" you ask the winds feebly as you see instead, strange, spindly warriors, in outlandish armour, harnessing garish weapons, with otherworldly symbols hung about them, and not a spot of hierarchy among them "my gosh" you exclaim, -TIME TO PLAY WITH ALL GAMES, CHESS REMIXED- these words echo in your brain'


Tim Flitcroft
Mr P Sterling will be scarecrow sized and operated by two broom handles from the back. The legs will be springs maybe with weights attached and the body of card or cloth with either a pound sterling symbol on it or visual elements from a fifty pound note. The head is a sheep skull with a bowler hat on top. It will be made quite crudely from wood and string - a Heath Robinson affair
"P Sterling, (AKA Zombie Banker) a paralympic competitor, will be bouncing and staggering around in pursuit of Olympic excellence. But don't be surprised if his debts weigh him down and make him rather a weak competitor. Best known for his dribbling skills with a ball his reputation for sharp practises means he is likely to take any unfair advantage he can."


Jo Harrison
Synchronised swimming being probably the most aesthetically pleasing Olympic event has prompted me to opt for a puppet activity of a soggy nature. Something of an aquatic disembodied can-can. Legs of all kinds will be whirling, swirling and flailing around to delight and enthral. Nose clips, swim hats and arm bands will be provided.

Rebecca Feiner
For the infamous Chutney 2012 Puppet Games,  closing ceremony of Camberwell Arts Festival, artist Rebecca Feiner poses the question, who pulls the strings?
She rejects the idea that we are mere puppets of the financial systems of the western world, with their logo driven games that make sport of us all.
Feiner gives a response that will inflame you to cut loose and break free .

Olivia-jane Ransley
In the spirit of what we English do well, morning Jeremy Kyle watching, sitting in the cold smoking area, last pint before time is called,  microwave meals and voting apathy I bring you Nick O'Tene the Tortoise.  He is 'so fast he is smoking'.  Rarely seen without a fag in his mouth or an oxygen mask at his feet, he swears the secret to his success as a long distance runner is his 40 a day habit.  If the speed he lights a cigarette is anything to go by then he will be undefeated at this years puppet olympics