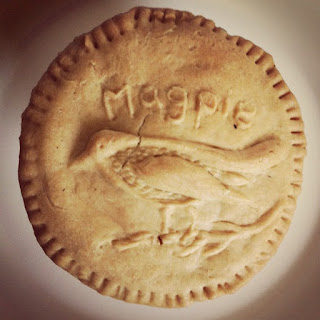 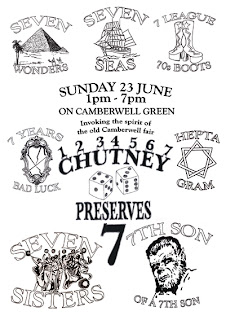 This Sunday 23 June I will be on Camberwell Green for the finale of Camberwell Arts Festival 2013 with Chutney Preserves 7 curated by Sarah Sparkes.
The theme of The Chutney Preserves this year is the number 7, as it had been running for 7 years now. So all the artists involved will be making artwork / sideshows / puppets around the theme of 7.


7 for a tale never to be told

I used to love seeing magpies before I found out about this nursery rhyme. Now I have to salute every time a see a magpie on its own to ward off the sorrow.

I will be working with Charlotte Squire in the Uncanny Kitchen. Last year I presented the feral parrot and this year I will be working with another bird by embodying the spirit of the much maligned Magpie. As the BBC webpage on birds puts it Magpies are so despised in the UK  that they "would probably have an Asbo slapped on them if they were teenagers."
However they are the most intelligent of birds and only seem to have this bad reputation in the UK, as in the rest of the world the magpie is often a symbol of good fortune.

I will be baking empty medieval style pie crusts (or coffins as they were known). As in the nursery rhyme 'Sing a Song of Sixpence' when the pie was filled with live blackbirds. My "Mag Pies" won't be filled with birds but with secrets of magpies.
Posted by Sarah Doyle at 22.6.13

Chalk Farm to Camberwell Green from Sarah Doyle on Vimeo.

Popular in the 1900’s she was once described by Noel Coward "I adore her and in my memory she is clearly the most graceful and charming artiste I have ever seen."

The festival which run by Camberwell Arts from Saturday 15th to Sunday 23rd June 2013, represents and  promotes the diverse cultural geographies of Camberwell. visit Camberwell Arts Festival for more information.