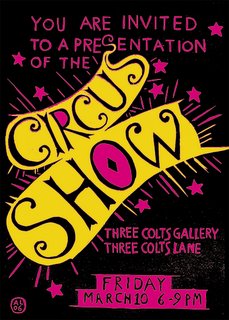 'The Circus Show" is a group show inspired by Alexander Calder's Circus that celebrates the spectacle and the crowd, play and transformation.


have a look at some images of the show here


Here is the Press Release for the show:

Step up, Roll up, Dress up, Pucker up, Bottoms up…. Three Colts Gallery are proud to present their most daring show to date. ‘The Circus Show’ is a group show inspired by Alexander Calder’s Circus that celebrates the spectacle and the crowd, play and transformation. The show will feature opening night performances, installations, paintings, sculptures - and more! On the opening night the audience will be invited (among other things) to Throw Custard Pies at a Tired Old Clown, Beat up a Traffic Warden with sticks, and win prizes for assaulting masochistic paintings. If that’s not enough they can chuckle at the giant clown’s arse poking through the ceiling and enjoy the musical performances. All the action will be filmed and shown as part of the exhibition. On entering the space you will be offered a carnival mask, confronted by an Elephant Podium that you will be required to manoeuvre around and encounter a field mic designed for hunting interplanetary sounds of endangered or magical nature. You can explore the burnt out dwelling of the clown who has run away from the Circus, and avoid the gigantic squirty flower that he left behind. More voyeuristically there will be an installation documenting the transformative process of a sex change operation and a miniature ‘Backstage at the Circus’ tableaux. You will not be alone in this experience though, for the walls shall bear their own spectators, a cast of characters to include a painted obituary of Sam the Worlds Ugliest Dog, a photo of Tony Blair and a head made entirely from plasticine. Alexander Calder used the circus as a place of fun, joy, motion. It allowed him to push the boundaries of what art could be - through play. The Circus also represents a site of chaos and excess, of mutation and exchange in the spirit of Bakhtinian liberation, of the ‘carnivalesque’. The Circus Show will be an exhibition of the clownish, comedic and grotesque or absurd. It will display the acrobatic and transformative; there will be metamorphoses between human and machine, privileging the crowd over the individual. So come along, we’ll have a gay old time! Cast: Jonathan Allen, Louise Andersson-Gylden, Craig Andrews, George Barker & Patrick Gould, Pascale Berthier, Betty Borthwick, Nik Carrick, Ross Casswell, John Chantler & Carina Thorén, Toby Clarkson, Lucienne Cole, Emma Coleman, Marcus Cope, Peter Darkin, Robert Dennis, Peter Denman, Sarah Doyle, Martin Dukes, Oliver Dungey, Lloyd Durling, Louisa Durose, Jamie Dyson, Tom Eastop, Zavier Ellis, Georgina Hooper, Calum F. Kerr, Richard Lamy, Mark McGowan, Hugh Mendes, John Miers, Stephanie Moran, Natalie Moran, Liz Murray, Sean O’Connor, Simon Ould, Klarita Pandolfi, David Parry, Lucy Pawlak, Harry Pye, Nicola Razores, Joseph Richards, Kes Richardson, Dai Roberts, Shawn Ryan, Julian Wakeling, Jonathan Waller, Edward Ward, Phillip Wilson-Perkin.
Posted by Sarah Doyle at 23.2.06